Men vs. Women - Who Plays Better?

It’s been a looooong time since our last blog but the long-planned article is finally there. And as it seems just on time as it coincides with the verbal exchange between Nigel Short and some female chess players. Purely coincidence. So here comes the analysis of the much debated battle of the sexes, carried out on the 64 squares of the chess board. Who carries away the victory?

Before I start, let me be clear that this is by no means a sexist article with no intent to offend anyone. We only take a neutral point of the analysis of the available ratings data by FIDE. No matter which side walks away with the attribute of being the better chess player (on average), this post does not make any gender better than the other. Let’s also acknowledge the fact that men and women ARE different in many ways. Fact. And even some voices might want to convince you otherwise there is no negativity around the term "different" and instead let’s see it from a positive angle: Differences make the world a more interesting place.

That preamble out of the way, let’s get started.

As I did previously, data from the FIDE ratings list (April 2015) have been condensed to give a clearer view. The April list had well over 200,000 registered players and was filtered down to exclude:
I’m aware that the last exclusion of the list is unfair to serious players with not enough games yet, but it should help the analysis to exclude players with a short-lived interest, perhaps skewing the statistics. In other words, let’s only consider players who compete for some time already and represent a more “typical” chess player.  This still leaves us with a list of 61,294 players which is a good sample size for most statistical purposes.

First argument on the table (without looking at data): There has never been a female world chess champion. True, but it should also be pointed out that when such title was first up for grabs at the end of the 19th century, women were mostly socially disadvantaged. Thus, for quite some time there was only a tiny likelihood that a woman could achieve this prestigious title. Times are changing and we should see in the next few decades whether or not a woman can manage to achieve the number One spot.

As for the numbers, the first thing which jumps into the eye is the ratio of male to female players: There are 16 (plus a bit) men per female player! Taking a purist standpoint and ignoring people’s personalities and gender specific attributes, this fact alone makes a male world champion much more likely than a female one, simply by means of chance, if you were to pick a world champion randomly. Another rather interesting fact is that FIDE-registered men come from 163 different countries, while women’s nationalities account for only 123; there are no female players, at least not FIDE registered ones, from 40 countries. The number one culprit on this list is – although strictly speaking not a country – Faroe Islands with 54 men vs. no women. Leaving the Faroe islands aside, and considering only “real” countries (no offence to Faroese players), we have Libya with 48 males. That said, all players from those 40 countries add up to only 350 players. While you could argue that discrimination against women is in place in some of those 40 countries, the number of men isn't great either making a world chess champion from one of those countries a dwindling small possibility, purely looking at numbers and not at individuals.

Next thing to do is to process all the data and take a look at some graphs. A picture can say more than a thousand numbers. The below two plots show the number of male / female players within a range of 10 ELO points; in other words, we look at the number of players who have a rating of 1000 to 1010 points, 1010 to 1020 points and so on. As statistical textbooks would tell you, you end up with a bell-shaped curve, also called Gauss distribution. It’s not perfect but it can be seen. Data for women show many spikes and more irregularities but that can be contributed to the rather small sample size of just above 3,500 players vs. over 57,000 for the male category. 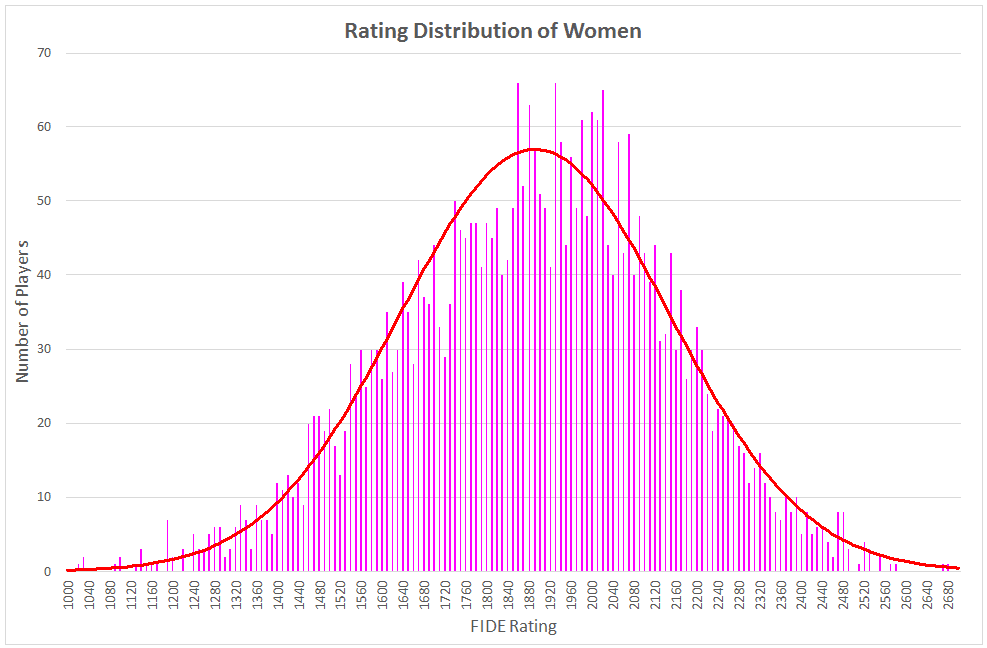 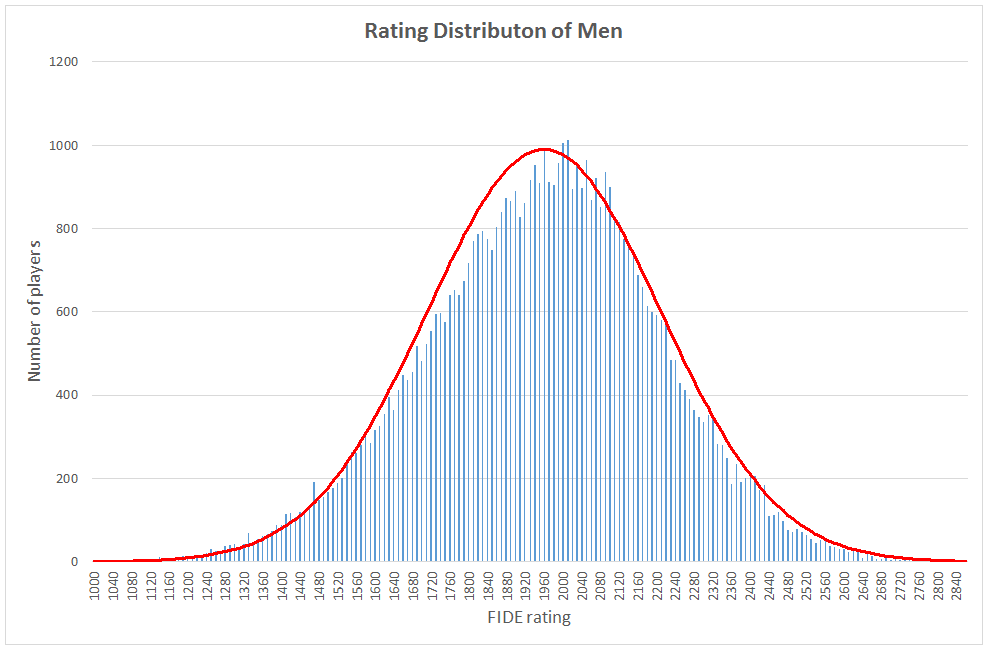 Nice, but how does this compare to each other? To avoid a graph full of clutter, I plotted only the Gauss curves for both categories (see below). The y-axis (height of plot) is normalised so the two categories can be easily compared rather than comparing the tiny 3,500 sample size with the massive 57,000. What can be read from this plot is that men achieve a higher average performance with an mean rating of 1960 points. Women are not too far off with an average of 1891 points, only lagging 69 points behind men. However, female players show a slightly broader distribution (best seen by the lower peak), meaning that there are more players who do perform better or worse than the average player (in simplistic terms). Looking at the two plots above again, it appears that the Gauss distribution might not be the best fit as in both cases it seems the curve is slightly over-representing lower-than-average values and being close to the data to the right (above average). 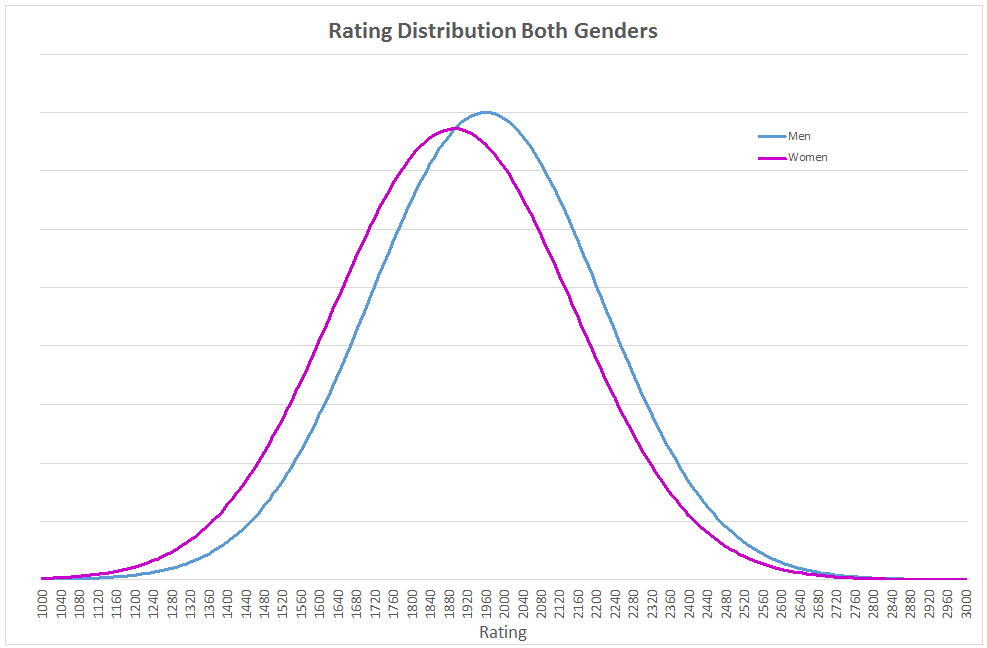 Now what do we get if we consider age? In my previous article, we looked already how your future looks like as a chess player as time goes on. The argument is not different here, except we split the two categories up. We find a clear pattern here: At any age, rated male chess players outperform their female counterparts by 27 to 182 points (ignoring the 95+ age category where no women are present). See below plot. The interesting fact here is that women seem to achieve their peak performance later than men. After the peak in a male’s life, a gradual decline follows, until you hit 80. (And then 100!) But women seem to fight back against their rating decline once they start their fifties and then again in their seventies. Whether this effect is true is debatable as there is only a very small sample size in those age groups for women. There are more 85-90 year old men in the list than 50-55 years old women. The lesson learnt from here: As a young energetic guy, don’t underestimate your senior female opponent in her thirties! 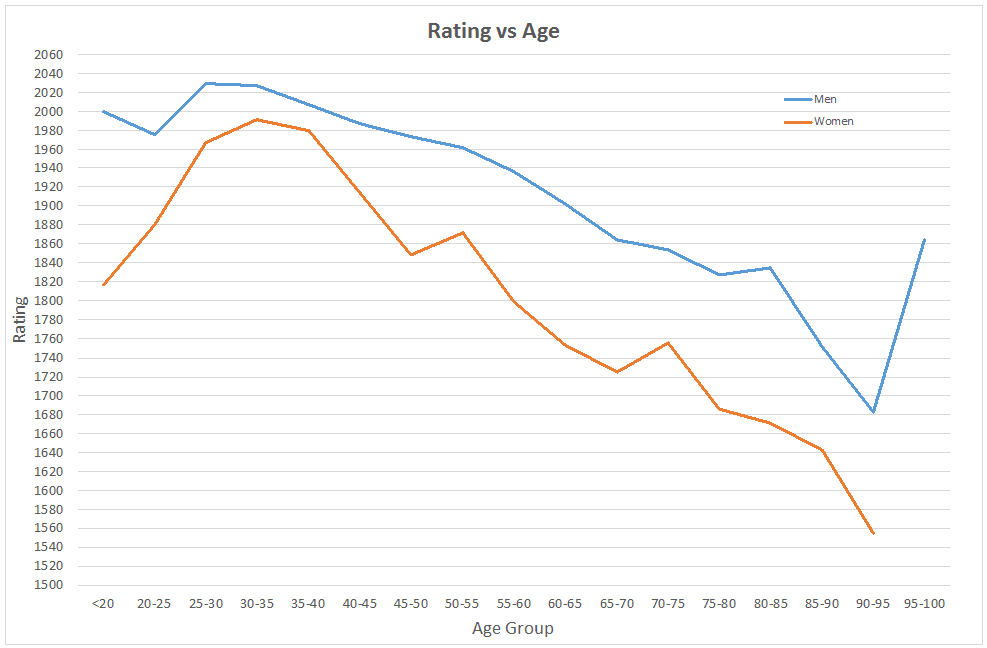 Let’s conclude here: Whether you like it or not, in the arena of competitive chess play, men do perform slightly better than women. (If you call this a sexist statement then ask yourself what you would say if it were “women play better chess than men”). Again, this is not an argument in form of “X is more intelligent than Y” and our analysis here does not take into account a person’s individuality. A good chess player can’t be characterised with one attribute only like strategy but other factors like emotions come into play too. While men may excel in some areas, women do better in others. Who knows, the Number One place may soon be filled by a female chess player – at least our analysis won’t exclude this possibility. And this would trigger yet another debate over this old question of who is the better chess player and why. But let's leave those discussions to others and we better get back to more important things :-)

Thanks for reading and Happy Chess!