Age vs. ELO - Your battle against time

Following my recent blog of what your chances are to beat Carlsen (or any other elite player), I was wondering about the importance of age in chess. Of course, it’s never too late to play chess and it’s good for your mental fitness at any age, but when can you expect to reach your peak? It’s also an interesting question to look into to find out what Anand’s chances are to take the world champion title back from Carlsen in November, with Anand being nearly twice Carlsen’s age. That said, FIDE needs to get this match organised first…

I wasn’t sure whether this question can be answered easily. Of course you can look into the FIDE Top-100 list and make an analysis of the age distribution. But we would deal with only 100 players, all of whom are professionals and their life gravitates around chess. Not uninteresting itself but it doesn’t necessarily answer the question of when most of us reach their peak performance in chess. (And for those statistically inclined you will agree that 100 samples does not give a good statistics either). And then… I found a list of all(?) FIDE registered players. 179,221 players in total, as of May 2014. A dream for every statistician (and no, I’m not one). That should allow for some good analysis – in fact, I will have to split the analysis into several articles since you probably want to play a game too.

Let me first recall some far-distanced memories from school (I was once young too). In psychology class, we learnt that intelligence peaks when you are around 18 to 19. Intelligence should not be mixed up with wisdom which increases with age. Without going too much into citing definitions, you can broadly define intelligence as the ability to solve problems and wisdom as the ability to recall information from memory. Brain memory that is, not the memory in google’s server farms. Since chess training and performance relies quite heavily on learnt patterns, openings, tactics, strategy, etc., pure intelligence alone won’t make a great player. In fact, most elite players wouldn’t classify themselves as geniuses but they all studied hard to be where they are.
Before we start our analysis, let me first define and justify some assumptions made. To answer our question of how your (chess) skills improve with age as accurately as possible, the list with its 179,000+ names was filtered down in the following way:
After filtering the list down to meet the above criteria, we are left with almost 71,000 players which is still a respectable sample size. That’s enough of preambles now, let’s look at the results!
The first plot shows you the average ELO rating in various 5-years age bands. The strong blue line gives the average rating, and the two thin lines above and below are the minimum and maximum ratings found per age category. As seen in the chart, the peak performance in chess is reached when you are in your late twenties. Probably not an unexpected result as this is the time when your intelligence is still near its maximum level and you had enough time to soak in lots of chess theory and gained enough playing experience. Once you hit your thirties, performance is slowly but gradually decreasing. Again, no surprise. 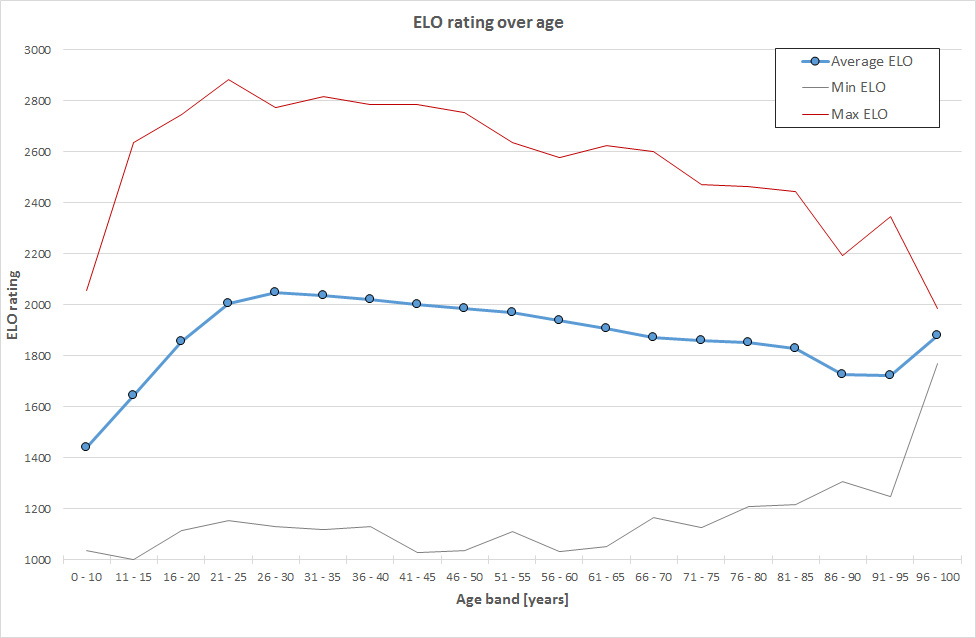 But what’s the jump in the rating once you are close to 100 years you may wonder? I’m afraid it’s not enlightenment – at least not in chess – but this jump by almost 200 points is down to the very small sample size: Only 2 players fall into this category. It would have been better to merge all 86+ players into an 86 and over category but I felt it’s a nice demonstration that you can still play good chess at an old age.
You may wish to ignore the bottom line as it could indicate players who don’t take their play very serious.
More of interest is the maximum rating found in each age group. The shape follows quite closely the average performance of players. Our respect goes to the 90+ year old player who still plays at a performance of over 2300 points!
Next thing is to have a look at the age distribution of active players, again divided in age bands of 5 years: 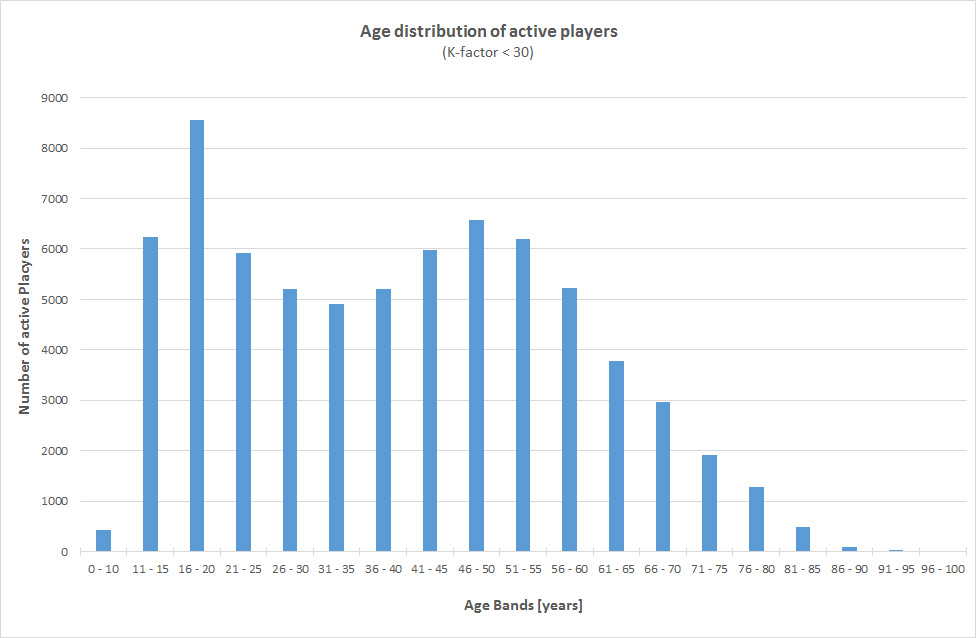 My expectation was to see the usual bell-shaped Gaussian distribution, maybe with a longer tail towards higher age; in other words you only have a few young and old players and a single peak somewhere in between. Thus, I was surprised by the plot above: (Competitive) chess is most popular amongst teenagers! Then, the interest seems to wane until it peaks a second time when players go into their forties and early fifties. As to the why of this shape, I can only theorise and I welcome any better or alternative explanations:
As a teenager, you get quickly enthusiastic about new leisure activities. You are also likely to be competitive (remember that unrated players and players with only a few played games are not included in the stats here). Apart from the lack of physical activity in chess, the game is great for teenagers as they usually have quite some spare time and not much of a financial investment is needed. Out of school, college or university, the hardships of life struck: You have a job, perhaps start a family and suddenly you don’t have as much time to play chess as you had before. And trust me, young children don’t like to see you deeply concentrated over a chessboard…
As you get older, it appears you have more time again – children getting more independent, you might divert more of your time towards chess rather than other sports, etc. Following the second peak the number of players goes down and down… and never peaks again. I expected to see another minor peak once people enter their retirement but I guess your competitiveness fades away and you prefer having friendly games with your pals. Finally, I believe the vanishing number of FIDE rated players at the far right side of the chart does not need any further explanation…
I believe this article got long enough. Thanks for reading that far

. Before concluding, I show you one more plot without any further explanation as it's not much more as a summary of what has been discussed already above. This last chart plots each of the nearly 71,000 players in terms of their age and ELO rating. Where can you find yourself? 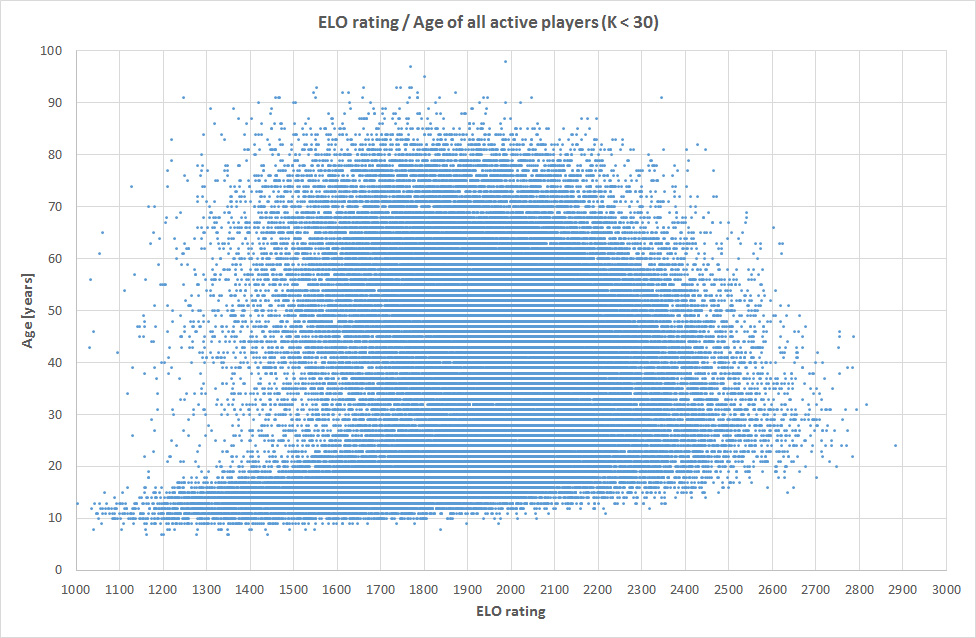 To go back to our first paragraph: Can Anand beat Carlsen in the match for the world chess champion title? His age is not on his side, but his experience of a long career is. The beauty of statistics is often not found in the average but in the outliers and it would be great to see if 44-year old Anand can prove that you don’t have to be a youngster to be at the top. In case you find yourself at the wrong side of the age curve (a nicer way to express “you are old”) do not despair: You could always be the exception to the rule – by being the statistical outlier you are confirming the validity of the theory